It was about eleven o’clock in the morning, mid October, with the sun not shining and the look of hard wet rain in the clearness of the foothills. I was wearing my powder-blue suit, with dark blue shirt, tie and display handkerchief, black brogues, black wool socks with dark blue clocks on them. I was neat, clean, shaved and sober, and I didn’t care who knew it. I was everything the well-dressed private detective ought to be. I was calling on four million dollars.

This is the opening paragraph of Raymond Chandler’s first novel, The Big Sleep (1939). This is the kind of writing that can make you forget you’re reading pulp fiction.

Raymond Chandler was essentially the guy who invented the hard-boiled, world-weary, first-person narrative style that came to define the pulp fiction detective novel genre. Chandler’s protagonist is Detective Philip Marlowe. He’s the kind of character that Garrison Keillor parodies with his Guy Noir: Private Eye radio sketches. (If you want to know more you can go here:

The colorful -and sometimes puzzling- similes jump out at you. It’s a hallmark of his style. Here are three I found just flipping back through The Little Sister (1949), the Chandler book I read most recently and the one that’s fresh in my mind.

- Her voice was as cool as boarding-house soup -

- She looked almost as hard to get as a haircut -

A few longer passages from the book struck me as exceptionally fine writing…again, considering that it’s pulp fiction.

Marlowe knocks on a door in a Hollywood apartment complex. A woman opens and is considering whether or not to let the detective in:

“Your name?” Her voice froze on the second word, like a feather taking off in a sudden draft. Then it cooed and hovered and soared and eddied and the silent invitation of a smile picked delicately at the corners of her lips, very slowly, like a child trying to pick up a snowflake. 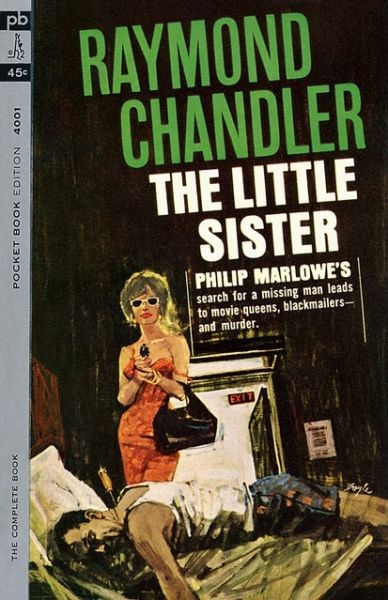 His stories are all set in Los Angeles and places within driving distance of it. At the beginning of Chapter 13, Detective Philip Marlowe is in a foul mood and he’s going for a long evening drive to try to clear his head:

Fast boys in stripped-down Fords shot in and out of the traffic streams, missing fenders by a sixteenth of an inch, but somehow always missing them. Tired men in dusty coupés and sedans winced and tightened their grip on the wheel and ploughed on north and west towards home and dinner, an evening with the sports page, the blatting of the radio, the whining of their spoiled children and the gabble of their silly wives. I drove past the gaudy neons and the false fronts behind them, the sleazy hamburger joints that look like palaces under the colors, the circular drive-ins as gay as circuses with the chipper hard-eyed carhops, the brilliant counters, and the sweaty greasy kitchens that would have poisoned a toad. Great double trucks rumbled down over Sepulveda from Wilmington and San Pedro and crossed towards the Ridge Route, starting up in low-low from the traffic lights with a growl of loins in the zoo.

Decades later, these same drive-in restaurants and neon façades that Chandler depicts as cheap and showy (and that were probably fairly new at the time) would come to be seen as the last remnants of a classic era in Los Angeles history; the 1940s–50s. This is the period that transformed Los Angeles from a city with an extensive streetcar system into the city of the personal automobile. People today fight to save these old places and they mourn their loss when efforts to save fail. During the years I lived in L.A. (2004-2011), the Googie-style diners with their stone & glass fronts and jutting, peaked rooflines gave character to the city. The 50s-era roadside motels with neon signage were a treat to the eye at night.

Examples of Googie style architecture abound on the internet, but to use a more self-serving link, here's the video I made for "Silver Moon Motel" for which I drove around and shot some of these places: 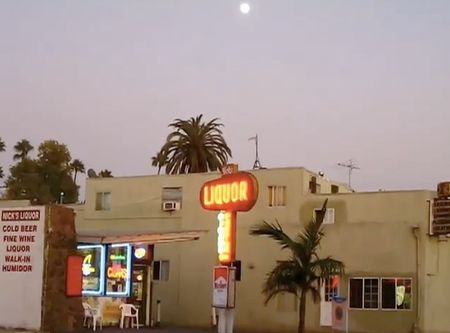 Two more scenes from The Little Sister. Both take place when Detective Marlowe is alone in his office. One is darkly amusing and the other gives a heavy impression of isolation verging on depression:

On the first page of the novel:

I had been stalking the bluebottle fly for five minutes, waiting for him to sit down. He didn't want to sit down. He just wanted to do wing-overs and sing the prologue to Pagliacci. I had the fly swatter poised in midair and I was all set. There was a patch of bright sunlight on the corner of the desk and I knew that sooner or later that was where he was going to light. But when he did, I didn't even see him at first. The buzzing stopped and there he was. And the phone rang.

I reached for it inch by inch with a slow and patient left hand. I lifted the phone slowly and spoke into it softly: "Hold the line a moment, please."

I laid the phone down gently on the brown blotter. He was still there, shining and blue-green and full of sin. I took a deep breath and swung. What was left of him sailed across the room and dropped to the carpet. I went over and picked him up by his good wing and dropped him into the wastebasket.

"Thanks for waiting," I said into the phone.

Much later in the story, things are going badly for the detective. His renegade methods have crossed local law enforcement and he may be looking at time behind bars if he doesn’t figure a way out for himself:

The office was empty again. No leggy brunettes, no little girls with slanted glasses, no neat dark men with gangster's eyes.

I sat down at the desk and watched the light fade. The going-home sounds had died away. Outside the neon signs began to glare at one another across the boulevard. There was something to be done, but I didn't know what. Whatever it was it would be useless. I tidied up my desk, listening to the scrape of a bucket on the tiling of the corridor. I put my papers away in the drawer, straightened the pen stand, got out a duster and wiped off the glass and then the telephone. It was dark and sleek in the fading light. It wouldn't ring tonight. Nobody would call me again. Not now, not this time. Perhaps not ever.

I put the duster away folded with the dust in it, leaned back and just sat, not smoking, not even thinking. I was a blank man. I had no face, no meaning, no personality, hardly a name. I didn't want to eat. I didn't even want a drink. I was the page from yesterday's calendar crumpled at the bottom of the waste basket.

Things can only get better from there, right?