It’s Saturday afternoon in front of Van Gogh’s Starry Night at the Museum of Modern Art in Manhattan. A rotating throng of about 20 people, interchangeable in their giddy & chatty demeanor, swarm around the painting. Most of them are holding up their phone cameras to the work. People take turns posing next to the painting. It’s constant photography.

Is this Starry Night or the baby Panda? Is this a world-class art museum or a zoo? How can I focus on the painting itself when every 5-10 seconds somebody’s head pops up next to the frame grinning back in my direction? (“Oh, pardon me, am I blocking your shot?”) 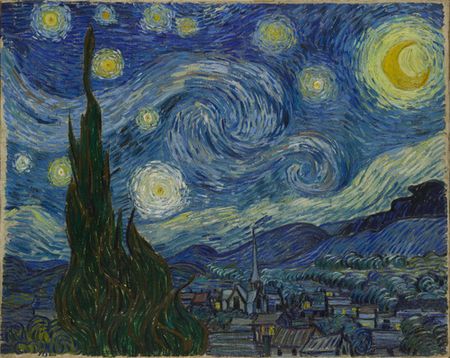 A visit to an art museum is an opportunity to be inspired, humbled, moved or fascinated by the works of art themselves. The way this works is to get a few quiet moments alone with, say, a painting and to let something in its essence commune with something of your own essence. (Here’s where I fall into various clumsy, clichéd or highfalutin-sounding phrases about letting the art ‘speak to you’, blah, blah. Like all things having to do with spiritual enrichment or soulfulness, it’s better done intuitively than written about analytically.)

In years past, anyway, I was able to make my museum visits early in the day on weekdays when the crowds were way down and there were no distractions, no noises, no heads in the way. It was on days like these that I was able to have my little “moments” with the works of Degas, Monet and Renoir (and even some other greats who’s names don’t end with a silent consonant). While I’ve always known that this ability to focus would be impossible at a major tourist draw on a Saturday afternoon, the spectacle I observed in front of Starry Night was a new low for me in my experiences as an occasional museum-goer.

First, I always thought there was a no-photography rule at art museums. I missed the day that went out the window. Maybe in the age of the cell phone camera they found it was impossible to stem the rising tide. Or maybe there’s something about digital photography that’s fundamentally different from film, I don’t know. Once cameras are involved, though, it’s all over. Contemplation, stillness, reverence… wait, forget reverence. Just simple respect is defeated and we’re reduced to a bunch of yahoos taking souvenir shots of our own faces next to some-famous-thing-like-any-other-famous-thing.

Secondly, I have to wonder what drives this universal compulsion. Is it a sense of personal grandiosity…like, ”my face rightfully belongs in the same frame with Starry Night, dammit!”, or is it the opposite? Is it an attempt to defeat that nagging sense of personal insignificance we might feel when confronted with something that’s significant, whether it’s Starry Night or the Grand Canyon?

I’m probably thinking too hard about it.

Most likely it’s much more casual and utilitarian than that. It’s a routine souvenir photo to be displayed briefly to friends and family and then discarded, like the memory of the visit itself. I shudder to imagine how many Facebook pages must have been updated last night (and every night) with that same photo of [insert-my-face-here] next to Van Gogh’s masterwork.

Come to think of it, that would make for a fascinating art exhibit in itself. Imagine a photo collection of hundreds of different faces, belonging to people from all over the world, just standing there grinning, smirking, beaming back at you from Starry Night.