On Tuesday morning, I think it was, or maybe Monday...just before the news broke that Levon Helm was in his final hours, I got home from work and picked The Last Waltz off of the DVD shelf. It was about the half-dozenth time or so that I've watched this great Scorcese-directed concert film of The Band's farewell concert in 1976. 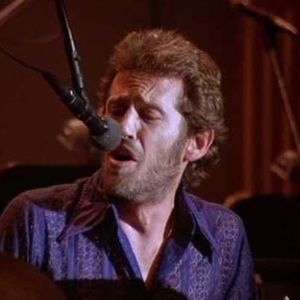 Most of the guys in The Band are charismatic in this film. There's a palpable sense of their being in their prime in spite of the fact that this was their official swan song. Robbie Robertson (guitarist); Good-looking and self-consciously cool...the storyteller and muted-note soloist. Rick Danko (bassist/singer); floppy and boyish, singing with convincing yearning on "It Makes No Difference." Garth Hudson (organist); The musical mad scientist who barely speaks in the film and when he does it's with a stiff, under-the-breath muttering that somehow comes off as humble and dignified. Richard Manuel (multi-instrumentalist/singer); A little weird. Something sneaky and odd about his demeanor, but he provides comic relief nonetheless.

Then there's Levon Helm (drummer/singer). He stands out by virtue of being the only American in a band of Canadians. Not just an American but an American Southerner, who's presence in The Band authenticates all the Smithsonian-like Americana in their lyrics.

The Band was not a star-driven band like the Stones or the Beatles. They had no John Lennon or Keith Richards or Mick Jagger. They were very much a sum-of-their-parts outfit. Their music was workmanlike and drew it's strength from sepia-toned folklore and just good, competent playing.

Drummers who sing are especially endearing. When the guy on stage with the most physically demanding job goes the extra mile to use up even more precious lung power to tell us something, then there's a sense that this guy must really have something to say. (How else do we explain the success of Night Ranger's "Sister Christian"?).

Levon gave an impression of real commitment in the way he performed. His twisted, shoulder-to-the-grindstone body position and his eyes-shut-tight grimace is captivating. In The Last Waltz there's a nice interview scene shot outdoors at night with crickets chirping in which he talks about his early musical experiences back in Arkansas. He looks and sounds more like an old-school NASCAR driver than a rock star. (And ironically the new-school NASCAR drivers of today come off more as rock stars than a lot of rock stars).

So I watched this film and went to sleep. Later that night when I read that Levon Helm was at death's door, it affected me more than I would have expected and over the last couple of days I keep hearing that voice in my head and I keep seeing that gleam in his eye. I feel funny writing this stuff because it's not like I knew him personally and it's not like I'm even a great fan of The Band. I respect them and I respected him.

I saw his daughter Amy perform with her band, Ollabelle, at the Living Room a few times back around 2000/01 and she struck me as having that same quality of humble earnestness. I didn't know at the time that she was Levon Helm's daughter. 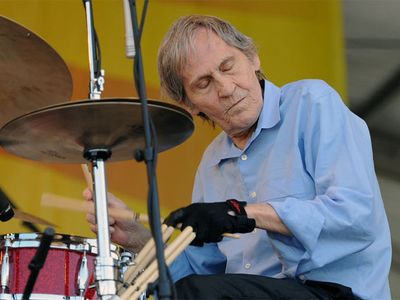 I have this feeling that Levon took a bigger chunk with him by virtue of representing all of us somehow.