Tonight I listened to Side Two of The Eagles-Their Greatest Hits 1971-1975. I don’t know what came over me. I don’t even like The Eagles that much, but I was flipping through my little collection of LPs (my big collection of LPs is lost in my parents’ garage somewhere) when I saw that aqua-blue cover with the coyote skull in the sand and I thought, “Well, this will be different.” 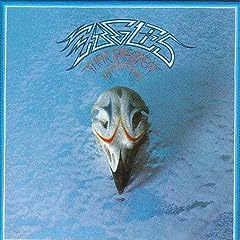 When the needle hit the groove of the first track, “One of the These Nights,” and that nice, slick, mid-70s, LA studio-produced, FM-radio, slightly disco-influenced, mellow country rock came on it felt, strangely, very modern to me even though it’s over thirty years old. I’ve been listening to so much really old, old stuff lately (Frank Sinatra, Tony Bennet, Nat King Cole, Billie Holiday, Dizzie Gillespie, Hoagy Carmichael, Muddy Waters, etc.) that anything recorded after 1968 sounds like the Jetsons by comparison.

But there’s something about The Eagles that really puts me in touch with my California roots. I heard this stuff all over the radio when I was a kid and it puts me right back in the family car on a Friday night, sitting in the back seat with my little sister, while we’re going out to our favorite Mexican restaurant (the Bluebird in Solona Beach, CA) for cheese & sauce-smothered burritos.

As a songwriter, though, what is most jarring about listening to The Eagles’ greatest hits is that it reminds me that once upon a time it was actually cool, and even respectable, to have a hit song on FM radio. Artists in those days didn’t lose street-cred by having well-produced, memorable hit songs that appealed to a mass audience. It’s just what you did if you were a rock band…or a mellow-rock band in this case.

Whenever I hear music from that era and that genre (James Taylor, Fleetwood Mac, Carly Simon, Jackson Browne, Poco, etc.) I think “why don’t we write hummable songs with spot-on harmonies and a string section anymore?” and then I remember “Oh yeah, because it would be completely cheesy & lame by today’s standards!”

That was before punk, I guess.

Anyway, Side Two felt so good that I went ahead and listened to Side One as well…though I could do without “Witchy Woman” for sure.