Catcher in the Rye

It’s already been a few days, but I can’t let the passing of J.D. Salinger go by without some kind of comment from my little corner of the internet about his signature work. 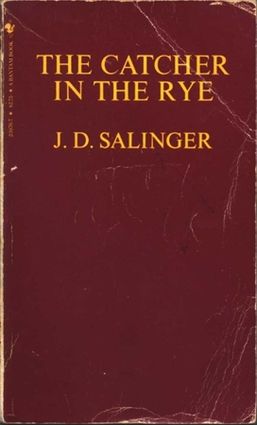 Catcher in the Rye was just about the only novel among those I had to read in high school that didn’t bore me to death. Unlike the others (Pride & Prejudice, Cry the Beloved Country, Candide, Passage to India or whatever-by-Shakespeare to name a few), Catcher in the Rye spoke to me through the voice of its misfit anti-hero/protagonist, Holden Caulfield, in a language that I could relate to. There was nothing wrong with those other books, I just couldn’t relate to them when I was a teen. Catcher struck me as so fresh and relevant that it was hard to believe I was reading it forty years after its first publication.

I won’t get into any long-winded analysis or personal takes here, even though it’s tempting to do because of the fun I’ve had reading this book over the years. (Holden wouldn’t approve and would denounce me as “a phony” for sure).

For those who haven’t read Catcher in the Rye, I’ll give you the first sentences from page one as a teaser:

If you really want to hear about it, the first thing you’ll probably want to know is where I was born, and what my lousy childhood was like, and how my parents were occupied and all before they had me, and all that David Copperfield kind of crap, but I don’t feel like going into it, if you want to know the truth. In the first place, that stuff bores me, and in the second place, my parents would have about two hemorrhages apiece if I told anything pretty personal about them. They’re quite touchy about anything like that, especially my father. They’re nice and all –I’m not saying that– but they’re also touchy as hell. Besides, I’m not going to tell you my whole goddam autobiography or anything. I’ll just tell you about this madman stuff that happened to me around last Christmas just before I got pretty run-down and had to come out here and take it easy.

It’s a sad and dark story for sure, but I read it again a few years ago and found it much funnier than I found it the first time. Last night I read a passage to my wife and we were dying laughing. Well, I was dying laughing and she was mostly laughing at me as I rolled off the couch in tears. It was the part where Holden goes…oh, never mind…you had to be there. (pst! it was the part where he goes to talk to “old Spencer,” his history teacher when he’s failing out of school and Spencer makes Holden sit through a reading of his own miserable paper on the ancient Eqyptians which begins, “The Eqyptians are extremely interesting to us today for various reasons…” Oh, man, that part kills me!)

Go read Catcher in the Rye if you haven’t already. Buy it in paperback from a used bookstore if you can find one…a used bookstore, that is! Holden says that if you download it onto a Kindle or some other electronic device then you’re just a phony Ivy League bastard that doesn’t deserve to know about the madman stuff that happened to him last Christmas!