Growing Up in Encinitas, California

Last weekend my wife and I drove down to my old hometown of Encinitas, CA. Our last visit was only two years before but Iâ€™m still sort of culture-shocked each time I see the old place. I end up saying, over and over again, things like â€œI canâ€™t believe all the people here!â€ and â€œit didnâ€™t used to be like this!â€ Yes, the sleepy little beach town of my youth has grown into some kind of yoga, pilates, massage, meditation, food & shopping destination for tourists and locals alike. Luxury vehicles prowl for parking space along the blocks of Highway 101 between D street and Swamiâ€™s temple as crowds stand waiting for sidewalk tables at the restaurants. This is the kind of future for Encinitas that was hard to foresee twenty years ago. 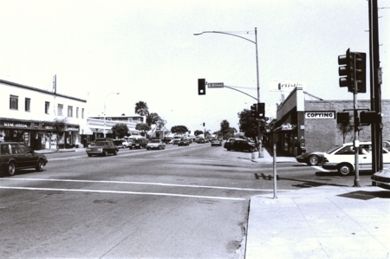 Encinitas in 1995 (Hwy 101 at E Street) When I was growing up, downtown Encinitas was kinda shabby & empty. It was shabby & empty in a good way, though. No pretension, no gaudy displays of wealth. You had your liquor store, laundromat, saloon, guitar store, auto repair place, run-down old theater (La Paloma), a couple restaurants, an ice cream place, a dairy, a couple surf shops, a car wash, a gas station or two, a carpet store, a bike store and not much more. That might sound like a lot, but it was all very mellow. It was a locals-only haven and the people who lived there and hung out there were mostly working-class types, surfers, artists and hippies. During the 70s and 80s, most of the newcomers, and particularly those with money, settled miles away in the canyons and hills way east of Interstate 5 in new housing tracts called La Costa, Village Park & Rancho-whatever. A bumper sticker of the time read â€œThere is no life east of I-5.â€ My parents moved to the area in 1971 and eventually settled us just barely east of I-5 in the hills near Batiquitos Lagoon. That was the cultural middle-ground between the beach neighborhoods along Highway 101 and those clean new suburbs in the back country. When I was a kid, we used to go downtown for the occasional movie at La Paloma (which had these funky bed-like seats in the outside sections along the walls), or for ice cream at the Roxy when it was just a little ice cream place. When I was in high school, the block of 101 between D & E streets was the closest thing we had to any kind of urban grit. The saloon, the liquor store and the laundromat on the west side of 101 were frequented by some of the harder-livinâ€™ types. Louâ€™s Records arrived (at its original location) some time in the early 80s and brought with it some of that goth/punk new-wave style that was so fresh at the time. The people who worked there dressed in black, had dyed, spikey hair and facial piercings long before any of that stuff was standard youth fashion. To a 15-year old with his polo shirts and feathered hair, these older kids at Louâ€™s were cool beyond reach. Between Louâ€™s Records and Blue Ridge Guitars I now had a reason to go downtown as often as I could. Iâ€™d ride my bike the 3 miles from my house down to Louâ€™s and pick up new LPs whenever my meager Wendyâ€™s paycheck would allow it. I bought mostly Clash, Pretenders & U2 records at that time. One of the first times I saw a real punk rocker it was a tall, skinny guy with a Mohawk and combat boots walking away down the alley between 101 and the railroad tracks. It was just this little snapshot of some kind of defiant individualism and swagger that made an impression at the time. I stayed in North San Diego County probably a little longer than I should have before leaving for good in 1997. During my last couple years there, I spent quite a bit of time in Encinitasâ€™ downtown strip. The coffeehouses Naked Bean (now Surfdog's Java Hut) and 25 East E (now demolished) were pretty good places to play gigs and to hang out with friends. I bought most of my clothes at Thrifty Threads and at the other place across the street that I canâ€™t remember the name of. Iâ€™m glad to see old Encinitas thriving and not just surviving. Whatâ€™s reassuring for someone like me is to see how so many of the longtime businesses have survived the transition from shabby to chic and must be doing better business than ever now with all the crowds. I could never live there again because Iâ€™ve been away for long enough that itâ€™s just not mine anymore. As disorienting as it is to see the way itâ€™s changed, Iâ€™m just glad itâ€™s still there for other people to enjoy.