Dad's Records (How I Learned to Listen to Music)

My dad is sitting in the well-worn, green-upholstered chair in the living room next to the stereo cabinet. His eyes are closed and the latest Jackson Browne album, The Pretender, is thumping loudly out of two speakers suspended from the ceiling on opposite sides of the fireplace. Heâ€™s got shoulder-length dark brown wavy hair and a California tan. Itâ€™s 1976, or maybe â€™77, and Iâ€™m 8 or 9 years old. While Iâ€™m aware that my dad is enjoying his music, I am where I prefer to be; in my own bedroom with my own stereo system. Itâ€™s a Fisher Price turntable with speakers made of blue and black plastic and Iâ€™m sitting on a basketball in the middle of the floor listening to the latest KISS album, Destroyer, and looking over the artwork on the record jacket. Different scenes, but really itâ€™s just the son emulating the father. Engaged listening. Paying attention while the music plays. Schooled in Lyrics At this point in my life I had about 6 records in my collection; a couple of Elvis, one Elton John, two of Shaun Cassidy and one of Donny Osmond. My dad had maybe 50 or 60 records, but back then I was only really aware of his two favorite artists; Jackson Browne and Stevie Wonder. If I happened to be in the living room while my dad was listening to his music, I might get a little education about what was going on in the lyrics. When Jackson sang â€œIâ€™m gonna be a happy idiot and struggle for the legal tender,â€ it was explained to me that â€˜legal tenderâ€™ meant money. Hmâ€¦so heâ€™s talking about struggling for money. I got that. Though my own struggles for the legal tender were still years off, it made some sense to me at the time anyway. While KISS was cranking out killer guitar riffs and peddling lame sexual metaphors that were over my head at the time and that I took literally instead (see, I thought â€œRocket Rideâ€ was about space travel and I thought a â€œLove Gunâ€ was a firearm), Jackson Browne was dealing in some really heavy, powerful stuff. I learned by way of explanation from Dad that â€œSleepâ€™s Dark and Silent Gateâ€ was a metaphor for death and that the song was written about his wife who had committed suicide (â€œSometimes I lie awake at night and wonder where my life will lead me, waiting to pass under sleepâ€™s dark and silent gateâ€). Whoa, slow down, Dad. Iâ€™m only 9 years old! Around this same time, Stevie Wonder had just released Songs in the Key of Life and that record got played a lot in our house. â€œVillage Ghetto Landâ€ painted a picture of a world that I didnâ€™t have to experience firsthand, growing up near the beach in California. â€œIsnâ€™t She Lovelyâ€ wasnâ€™t about a lover, it was about his newborn baby. There were songs about brotherly love, ethnic pride and even God. Big, big stuff. Sound Quality My dadâ€™s records didnâ€™t just need to have good lyrics, they had to sound good, too. His home stereo system was carefully assembled from some of the best components that a working manâ€™s wage could buy at the time. Some of the parts he even put together himself. Stereo Review magazine used to rate new albums on their sound quality as well as their artistry and he used the magazine as a guide to what was out there and what to check out. The culture of hi-fi home stereo enthusiasts was alive and well in the mid 70s when music was still recorded on tape and the compact disc didnâ€™t yet exist. Songs in the Key of Life was state of the art in 1977 and it sounded great. It still sounds great today. Expanding my Musical Horizons Over the years, as I got older and Iâ€™d managed to â€œexpand my musical horizonsâ€ beyond KISS (as my father had sagely advised me to do), and as my own LP collection of rock, punk and reggae grew about as fast as my Wendyâ€™s paycheck would allow (I didnâ€™t buy my first cd until sometime in the mid-90s), Iâ€™d occasionally go through my dadâ€™s records just to see what I might come to like since Iâ€™d last checked. The records were stored on the bottom shelf of the stereo cabinet with the spines facing out so you could browse without having to touch and flip every album. I could dig a little Eric Clapton and Pink Floyd, Atlanta Rhythm Section and Fleetwood Mac were alright, BB King was cool and Joni Mitchell was intense. These Days Today I have a cd collection of several hundred and there are certain albums that I will always see as Dadâ€™s records because thatâ€™s where I got to know them first. Van Morrison's Common One, Joni Mitchell's Hissing of Summer Lawns, Willie Nelson's Red Headed Stranger, Sonny Terry & Brownie McGee's Sonny & Terry and Donny Hathaway's LIVE, in addition to all of Stevie Wonderâ€™s & Jackson Browneâ€™s 70s work. In fact, even the sound of Jackson Browneâ€™s voice carries in it for me kind of fatherly resonance. A few years ago my dad told me how heâ€™s tried repeatedly to get rid of certain records that heâ€™s had for years and years but never listens to, only to change his mind and keep them. What happens is that he pulls an album out of the collection, looks at the cover, and then realizes that just looking at the cover is an experience in itself and it brings back memories in the same way that a photograph does. So then he just puts it backâ€¦never intending to listen to it, only intending to keep it around. 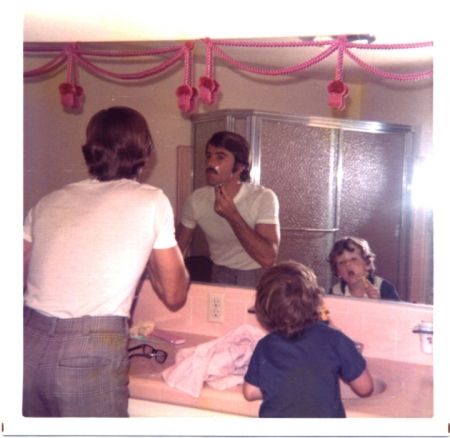